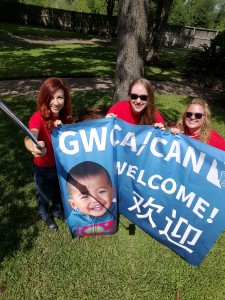 The kids arrived safely yesterday and boy what an adventure it was! Kayley, Cayce, and myself began the journey Sunday afternoon making the drive from Austin to Houston. We wanted to wake up Monday refreshed, ready to go, and with plenty to time to spare. We checked our lists several times, and braced ourselves for what we hoped would be an unforgettable day.

Monday came bright and early. We again checked our lists, sent out some emails, and tried to maintain composure as we all sensed our anxiety, eagerness, and nervousness beginning to build. News stations had gotten word of our program and begin calling us asking for details about the day, that’s when the excitement, set it in. This is really happening, the KIDS ARE COMING! We probably shouted that several times over in the car as we made our journey to IAH airport to begin the incredible day. 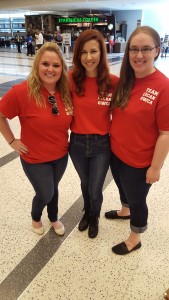 We did a quick drive through to determine what the terminal distance looked like and what we were likely facing. I dropped Kayley and Cayce off to embark on domestic terminals in hopes the ticketing agents would issue gate passes for us to use to help escort everyone to their appropriate gates. I ventured on to International Arrivals. IAH has a great little arrivals area with a Starbucks and ample space to gather and wait. A long time family friend of mine showed up to be of any assistance so we game planned the area as we awaited Cayce and Kayley.

We found the perfect area to hang the banner, move some seating around and made ourselves at home. United was INCREDIBLE issuing us gate passes in order to escort the little ones, and boy that was a relief. Three groups were departing from Houston to continue on their last leg of their journey to their host families. So then we began reflecting, 30 kids, 4 adult chaperones, 16 families, 3-4 news crews, ok… we can do this! And we did, with so much help from so many people, the arrival was incredible! 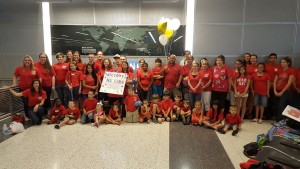 As families begin to show up the day became more real, but our nerves began to settle, Cayce and I at one point checked our heart rates and they were well over 100.

It seemed as though traffic was everywhere around Houston and two families were stuck on their way from  Dallas, the entire freeway was shut down. We tried to ease their nerves, I can only imagine their anticipation. 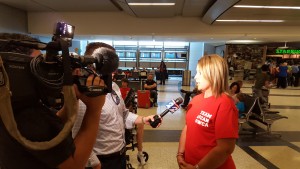 As families started to arrive so did the media. The news stations were enthralled with all of the families stories as I knew they would be. EVERY summer host family has an incredible story and we were so happy to share many of them.

Finally it happened, the kids landed at 4:28, almost an hour late. Just in time one of the stalled families arrived, not to miss the arrival of the kiddos. We waited a good 20 minutes before lining up around the entrance to prepare for their arrival.  And then we waited. Customs took quite some time but at a quarter to six, here they came. Their little red shirts,there was cheering, some of the kids came out running and excited. It was actually the happiest arrival I could have ever imagined. I quickly re routed the mai 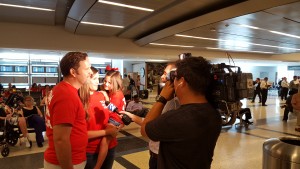 n chaperone and kiddos over to the side as we need to get the 14 kiddos on other flights out of there.

There was a good ten minutes that seems blurry now, Cayce and Kayley held it toge 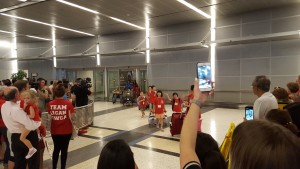 ther by getting the right groups to the right places. As I saw each of child’s face my heart burst as I remembered seeing their sweet faces just months ago in their orphanage, I couldn’t believe it, they were finally here! We spent sometime trying to match kiddos with families and ensure that no one ran off. It was kind of like herding turtles with a little more chaos. There were some sweet moments, some teary moments, and some unforgettable moments. I watched as parent’s embraced their soon be children for the first time, and my heart warmed for them. I watched young kids meet strangers and take them like it was nothing. I had to pinch myself to remind myself that everything around me was actually happening.

Many families were able to get out of there very quick as that is very important for some of the kiddos before emotions set it in. For some a couple of the kiddos they were not having it, but hey if I were them, I would be petrified. True resilience was shown in that airport, those kids have so much past and so much heartbreak, but to have someone there to hug, hold, and love them was just amazing.

Our final family was able to show up and so luck that their sister was able to wait with their boy. Finally, everyone was they needed to be and the three of us were united, we just looked at each other with sigh of relief. There was a quick unanimous decision to stay over night in Houston as it was after 9pm and we were exhausted. Almost 10 hours will do that to you. We settled some baggage issues and went on our way. As we began the 30 minute car ride to my parents house and our fun began to recharge we began seeing texts, and Facebook posts regarding our entire day being documented on TV! WOW! We hurried home to catch the 10pm news and my Mom had pizza waiting! What a way to end the day, we watched our stories on TV, counted passports, reviewed checklists and waited patiently to hear from NY, ATL, and SEA as the kiddos arrived.

Without any further hitches the remaining 14 kiddos made it safe to their destinations.

All day we have loved reading and hearing how everyone is doing, it’s not all sunshine and rainbows, but it shouldn’t be. We promise to keep everyone posted on how all the kids are doing. But for now we will leave you with these awesome photos! 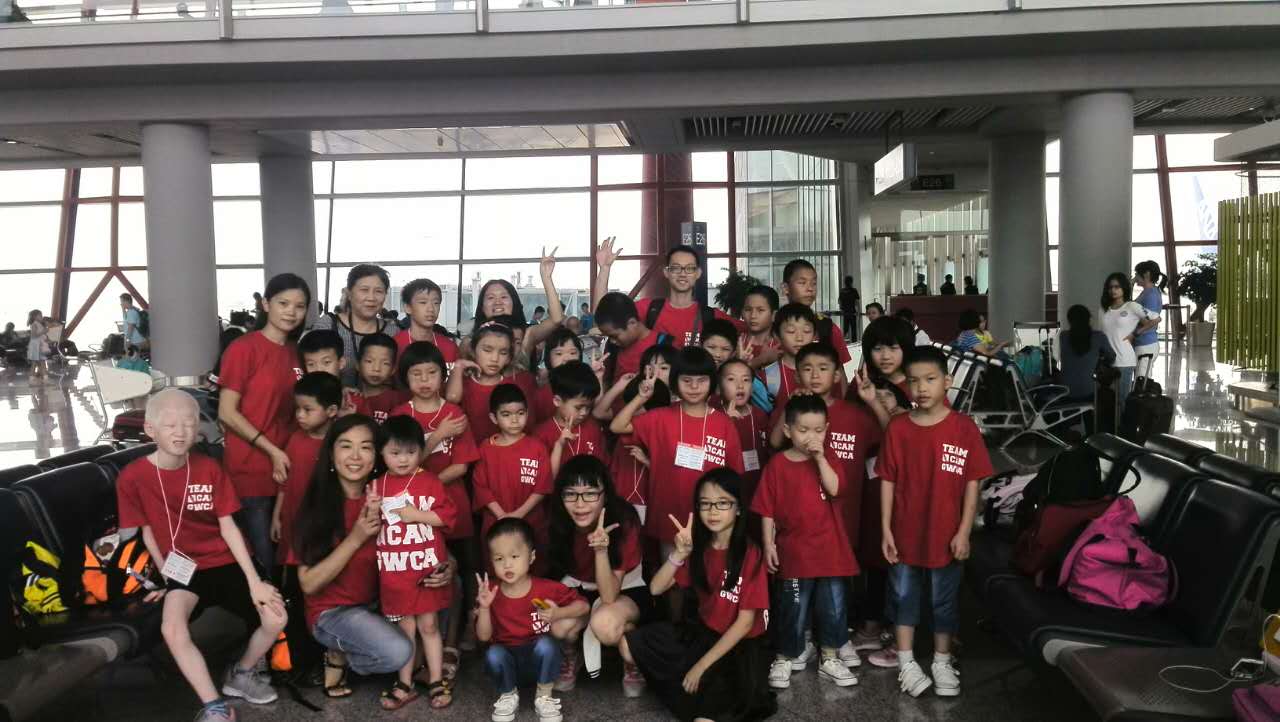 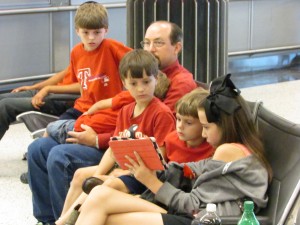 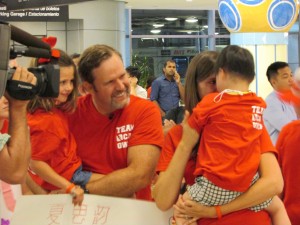 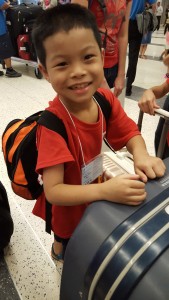 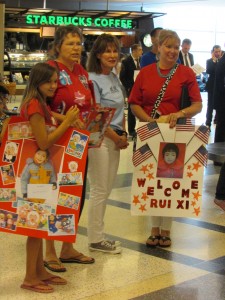 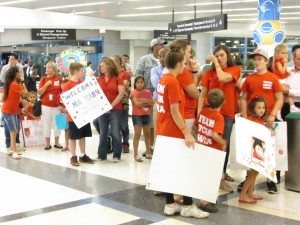 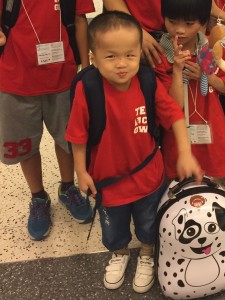 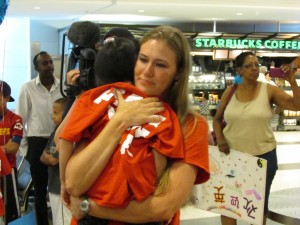 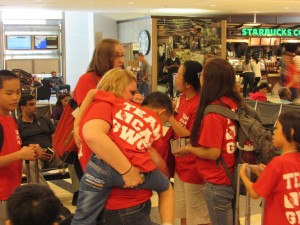 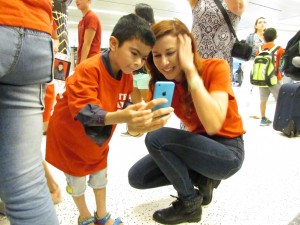